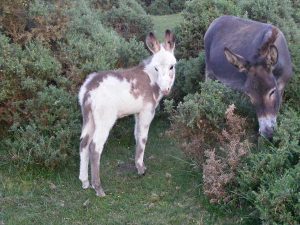 Sooty, right, a pregnant donkey killed in the New Forest in a car accident

Thousands of drivers caught speeding in New Forest safety crackdown (From Bournemouth Echo)
MORE than 2,400 drivers have been caught speeding in the New Forest since a new campaign to cut animal accidents was launched last year.
A 12-month initiative funded by the Verderers has seen the introduction of an infra-red camera that can photograph vehicles in the dark.

A total of 1,187 motorists have been caught flouting the 40mph limit on unfenced roads since the campaign started in October.

A further 1,265 drivers have been snapped on other routes in the Forest, including a 30mph stretch of the A337 near Brockenhurst

Speed enforcement officers have also been deployed on a 60mph section of the A35 – one the main east-west routes across the Forest.
Motorists caught speeding are fined or offered a place on a driver awareness course, depending on how fast they were going.

Last night the crackdown was welcomed by the Commoners’ Defence Association (CDA), which represents the owners of the thousands of ponies, cattle and donkeys that graze the landscape.

“We hope motorists will take notice of the numbers being caught and will seek to moderate their speed accordingly, which is why the project was launched in the first place.”

The campaign is already paying dividends on at least one of the roads with a bad reputation for accidents.
The B3078 between Brook and Godshill, normally one of the worst routes in the Forest for animal deaths, was accident-free throughout the whole of last month.

A year ago, before the new initiative was launched, a donkey was killed in a hit-and-run incident on the B3078 near Bramshaw.

Ten-year-old Sooty was owned by Dan Rangecroft, 14, ofMarchwood, who joined his mother Sarah in urging drivers to cut their speed.

Other victims of animal accidents in the Forest include Jo-Jo, a six-month-old donkey that had featured in a road safety campaign.

Jo-Jo was owned by Robert Byford, of Brockenhurst, who has attached reflective stickers to all his other donkeys in a bid to keep them safe.

A Verderers’ spokesman said: “It’s a great shame so many motorists are prepared to break the speed limits, which exist to benefit us all. Roads across the open forest do lend themselves to speeding because there’s less traffic around – but that’s no excuse.”

This website uses cookies to improve your experience while you navigate through the website. Out of these, the cookies that are categorized as necessary are stored on your browser as they are essential for the working of basic functionalities of the website. We also use third-party cookies that help us analyze and understand how you use this website. These cookies will be stored in your browser only with your consent. You also have the option to opt-out of these cookies. But opting out of some of these cookies may affect your browsing experience.
Necessary Always Enabled

Any cookies that may not be particularly necessary for the website to function and is used specifically to collect user personal data via analytics, ads, other embedded contents are termed as non-necessary cookies. It is mandatory to procure user consent prior to running these cookies on your website.